In addition to my popular Matchbox CoCo 3 and Mr (MiSTer) CoCo 3 clones, I’ve accepted the offer to port my CoCo 3 core to the MiST system. To follow my progress live, visit the MiST CoCo facebook group.

In 2019 after I was asked by several people if I would port the CoCo 3 to the MiST system, Bruno Silva organized a fund where numerous members of the MiST community contributed towards a MISTICA FPGA system in exchange for me doing the port of my popular CoCo 3 clone. My condition was that I will not be rushed or be considered to be working for anybody, and to just be patient and let me do this port.

Even though the MISTICA rig is nice, it isn’t as developer-friendly as the MiST . The two systems are actually quite similar since MiSTer is based on the original MiST system. As the CoCo 3 core progresses I’ll be able to tell which features of the Mr CoCo can also be enjoyed in the MIST CoCo. You see, the MiST uses the Cyclone III FPGA which has les I/O pins and internal RAM while the MiSTer uses a far superior Cyclone V SoC. Thankfully I was able to ditch the 512KB of FPGA RAM of the MiSTer CoCo last year and start using the SDRAM chip as RAM which worked out fine. For this MIST system the SDRAM method is also required, so at least that hard work is already done. 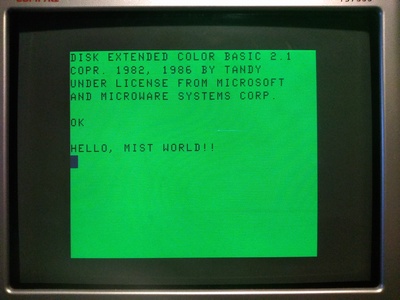